Wifikill apk  is an incredible application that lets you to debilitate the gadgets associated with a similar wifi you are associated. All things considered, with this application you can impair web association for a gadget on a similar system. Wifikill 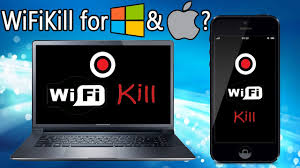 Wifikill utilizes an exceptional method that enables you to limit web access to any of other, or all of different gadgets without a moment’s delay. It implies different clients in which you square/limit web get to, are as yet associated with wifi organize yet they can’t access to web. Indeed, even after they reconnect to the wifi organize, on the off chance that you are as yet utilizing wifikill, they can’t utilize web inside certain time, when wifikill has not in any case revived the rundown of gadgets.

An Internet off button is the cybercrime and countermeasures idea of enacting a solitary stopped instrument for all Internet movement. The hypothesis behind an off button is production of a solitary purpose of control for some expert to control keeping in mind the end goal to close down the Internet to shield it from unspecified aggressors; be that as it may, gatherings, for example, the American Civil Liberties Union and the Nominet Trust have reprimanded the recommendations for usage made up until this point.

The possibility of cyberwarfare over the 2000s has incited the drafting of enactment by US authorities, however worldwide the ramifications of really “murdering” the Internet has provoked feedback of the thought in the United States. Amid the Arab Spring in Tunisia, Egypt, and Libya access to the Internet was denied[1] with an end goal to constrain peer systems administration to encourage association. While the impacts of stopping data get to are disputable, the theme of an off button remains a subject that remaining parts to be settled.

The Communications Act of 1934 set up the United States’ Federal control of electronic correspondences by the Federal Communications Commission (FCC). This demonstration, made by the Franklin D. Roosevelt Administration, gave the president forces of control over the media in specific situations. This demonstration was the premise of administrative power for the official branch of the legislature to control electronic correspondences in the United States.

Presidential Decision Directive 63 (PDD-63), marked in May 1998, set up a structure under White House initiative to facilitate the exercises of assigned lead offices and offices, in association with their partners from the private area, to “kill any noteworthy powerlessness to both physical and digital assaults on our basic frameworks, including particularly our digital frameworks.”

This is your very first post. Click the Edit link to modify or delete it, or start a new post. If you like, use this post to tell readers why you started this blog and what you plan to do with it.